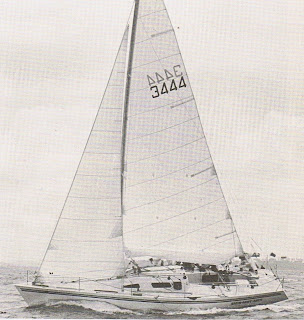 Smir-Noff-Agen was a centreboard One Tonner designed by Bruce Farr (Design #63, 27.5ft IOR) for a syndicate headed by Don Lidgard for the 1977 One Ton Cup, held in Auckland, New Zealand. Smir-Noff-Agen joined three other Farr centreboarders The Red Lion, Mr Jumpa and Jenny H.  All these yachts were to a similar design but various small differences were apparent on the rating sheets, with Smir-Noff-Agen sporting a larger mainsail and smaller jibs to reflect the crew's background in skiffs and dinghy sailing, and a simple deck layout to minimise variables in sail-setting, especially at night.

These new generation One Tonners  were considered experimental at the time, combining light displacement and high ballast ratios with the use of a deep and efficient centreboard and a more flexible and complex rig than Farr's earlier fixed keel One Tonners. The yachts were a significant development of Farr's earlier keelboats from 1975/76 and after the rulemakers failed to close the centreboard loophole exposed to great effect by the Britton Chance design Resolute Salmon a year earlier, a centreboard was chosen rather than a keel, although the fins on the Farr yachts weighed about 750lbs, despite the fact that this was discouraged by the IOR.

Smir-Noff-Agen faced an early challenge over sponsorship advertising, and changes were made to the yacht's signwriting before the New Zealand One Ton Cup trials began, but the name survived. Challenges to the stability of the new centreboarders were also met in the case of Smir-Noff-Agen by undergoing a pull-down test, with the centreboard half-retracted, which she easily passed.

Lidgard and his crew went on to contest the trials to determine the New Zealand six-boat team for the One Ton Cup. She started solidly with a second in the first and second races, but lost her rig in the middle distance race. The mast was repaired in time for the fourth race which she won, and followed this with a second in the long ocean race to qualify for the team in third place overall.
Smir-Noff-Agen also entered the Southern Cross Cup trials, to select the New Zealand three-boat team that would compete for the Southern Cross Cup to be held in Sydney at the end of the year. In a mixed boat fleet Smir-Noff-Agen had a close tussle with other centreboarders that dominated the results and joined the Half Tonner Swuzzlebubble and Jenny-H for the trip across the Tasman.
The Southern Cross Cup trials showed Smir-Noff-Agen to be a touch quicker than her sisterships, and her new status as favourite of the Farr yachts looked well founded after she won the first race of the One Ton Cup. She couldn't follow this up in the second race where she finished fifth and then sixth in the middle-distance race, and a loss of rig tension was the suspected culprit. With a tightened rig she looked good early in the fourth race, but had to retire when a forestay fitting was discovered to have parted, and talk of sabotage ensued.
Smir-Noff-Agen sailed an impressive race in the final long ocean race to claim the White Horse Trophy, and finished in third place overall. Her win in the long offshore was despite a near calamitous broach in the gale-afflicted race - Lidgard had called for a spinnaker in 50 knots on the leg between Channel Island and Flat Rock - the boat recovered from the resulting wipeout, but this event was nevertheless used as evidence of the safety deficiencies of the yachts by those at the time who were not in favour of the new light displacement trend that offshore racing was taking.
Smir-Noff-Agen made her own way across the Tasman for the Southern Cross Cup (after a controversal process to obtain the necessary Category 1 safety certificate). In Sydney and in a fleet of mixed company, with teams made up of anything from Half Tonners to Maxis, the New Zealand team was dominant.
The New Zealand team went into the Sydney Hobart race finale with a massive 130 point advantage over the second placed New South Wales team. Atrocious conditions in the Sydney Hobart meant, however, that this points buffer became the New Zealand teams' buffer as Smir-Noff-Agen retired with damage to the rib frames for'ard after falling off a large wave, and then Swuzzlebubble also withdrew after Ian Gibbs and his crew decided that the conditions were too extreme for a small Half Tonner. Jenny H continued on, though not without their own problems with another failure in a for'ard frame. Haslar and his crew nursed the boat through the worst of the storm and managed to finish in fifth place, and securing the Southern Cross Cup for New Zealand and finishing as the top yacht overall.
Smir-Noff-Agen was later sold in Australia and became Vanguard. She was later re-named Scallywag II (this was confusingly close to the new name of Jenny H which had been re-named Scalawag by her new US owners). Her most notable result in later years was winning the 1982 Sydney-Hobart race. Later she became Best by Farr, and she was recently laid up in Mermaid Beach (Queensland Gold Coast).
Photos of Smir-Noff-Agen under construction and on her launching day can be seen here.

Smir-Noff-Agen was shipped to Dubai in 2016 and is undergoing a full restoration. More here.