For the triple-weighted Round the State Race, the fleet initially encountered light, fluky wind, but Sorcery moved into the fore as the leaders fetched Makapuu and the Maxis flew no.1 genoas and set jib tops, although Sorcery had destroyed her no.2 on a spreader prior to the start and had to live with a large gap in her inventory for the duration of the race. After some fast reaching, Ragamuffin (ex-Bumblebee IV) lead the fleet into a dead zone off Niihau, with Sorcery and Nirvana astern. These three were the first to slip free of the windless void in the late afternoon before starting the long reach down to South Point. Boomerang took the lead about 55 miles from South Point, moving a mile ahead of Kialoa IV and Sorcery, and went on to break Kialoa’s 1982 record for the race by over an hour. Condor saved her best finish for the most important race coming in third, followed by Sorcery, Nirvana and Ragamuffin.

Sorcery finished the series and in tenth place overall (3/16/2/13/21), just ahead of Nirvana but well behind Boomerang and Kialoa IV who finished first and second respectively. She finished in third place in Class A (1/4/2/4/4).
Sorcery went on to compete in the 1984 Big Boat Series in San Francisco, posting a series of third places for third overall, with Boomerang taking out overall honours in the six-yacht Maxi fleet.
In February 1986 Sorcery competed in the 1,100 mile San Diego to Manzanillo (Mexico) race, where she set an elapsed-time record of 6 days and one hour, surpassing the old record set by the 67-foot yacht Merlin in 1978 by over an hour.
Later that year Sorcery took line honours in all five races in the 1986 Kenwood Cup (the new name for the Clipper Cup). This included winning the Molokai Race from Windward Passage by 12 minutes. This was followed by a nearly four-day match race with Passage in the 775-mile Round the State race. The two Maxis covered each other tack-for-tack throughout the race, cross-tacking 13 times alone during the 60-mile windward leg up the Big Island of Hawaii’s rugged Ka’u coastline. The race ended in a heated neck-and-neck downwind duel to the Diamond Head finish line with Sorcery finishing just under 11 minutes ahead of Passage.
Sorcery competed in the Kenwood Cup again in 1988, with the series incorporating the Maxi World Championship and featuring the biggest fleet of Maxis ever assembled in the Pacific, including Congere, Emeraude, Il Moro di Venezia, Kialoa V, Matador, Ondine VII, Ragamuffin, Sovereign, Windward Passage II and Winterhawk (ex-Ceramco New Zealand). By this stage the 70.0ft rating limit for the series had been eased, and most of the Maxis were optimised beyond this measurement, with Sorcery having an increased rating of 70.82ft, which also suggested she had undergone some modifications to increase speed. The new Frers-designed and fractionally-rigged Windward Passage II was the fastest Maxi in 1988, but Sorcery threatened her overall hegemony by almost taking line honours in Molokai Race after Passage fell into a hole just before the finish line. Overall, however, Sorcery finished down the overall standings.
Sorcery also raced in the 1990 Kenwood Cup, finishing in second place in Class A, behind the new Drumbeat which generally had the legs of her older rival. There was one race when Wood and his crew gave Drumbeat a series fright, leading for all but the final leg. Seahorse magazine described it as a truly splendid race, where by a combination of fortune and inspired sailing the obviously slower Sorcery, using every wile and trick in the book, stayed just in front of the quicker boat almost all the way around. However two-thirds of the way up the final beat Sorcery tacked on Drumbeat's weather bow and the genoa leech caught on a spreader, causing it to tear and then split, and Sorcery's three-hour moment of glory had passed. The 1990 edition also featured the inaugural sailing of the 390-mile Kaula Race as the replacement for the 775-mile Round the State Race, but while a shorter distance, it involved a 141-mile beat in up to 30 knots for the return leg from Kaula to Oahu, and many seasoned sailors commented that it was one of the toughest races they had ever experienced. Drumbeat and Sorcery rounded Kaula just minutes apart, but on the return leg Sorcery suffered a number of gear failures including the loss of both main and genoa halyards, putting them more than 2 hours behind at the finish.
Sorcery headed to Australia in 1994 to race in that year's Sydney-Hobart, where she finished fourth across the line, just three hours behind line honours winner Tasmania (ex-New Zealand Endeavour), and 26th on corrected time (of 236 yachts). A video of that race can be seen here:
Sorcery raced in Antigua Race week in April/May 1996 and placed second overall in the Big Boat class and top of those boats more than ten years old. She then sailed across the Atlantic to Ireland, posting a best days’ run of 274 miles, and raced in the Round Ireland Race and Ford Cork Week – in the latter she won the first light airs race of the regatta, after withdrawing from the first race after one of her 26-strong crew was flipped overboard by a running spinnaker sheet, who was eventually recovered uninjured by a rescue boat.
In her last racing campaign under Woods’ ownership in the 2006 MEXORC she won all seven races against other more modern yachts such as Pendragon and Magnitude 80.
Jake Wood died in March 2007, and a subsequent obituary in Latitude 38 magazine in May 2007 noted that one aspect that had set him apart from the many owners that came and went through the ranks of various fleets was that he held onto boats that he enjoyed. So, long after the IOR Maxi fleets had gone, Woods still sailed Sorcery, racing her always with a huge crowd aboard in just about every Southern California, Mexican or Hawaiian event at one time or another. A life-long competitive sailor from England, John Walker, bought Sorcery and he relocated the yacht from Marina del Rey to Vallejo in November 2007. At some stage, possibly post-2007, Sorcery was fitted with a new bulbed keel. The IMUA Yacht Charter Company runs a Facebook page for Sorcery and where readers can stay up to date with her continued maintenance and sailing events.
Other photographs and information on Sorcery can also be seen on the Histoiredeshalfs website here.
Posted by RB Sailing_nzl at 1/04/2023 No comments:

Windward Passage was one of the best-known Maxi yachts of the IOR period, and greatly admired for her longevity that spanned much this era, thanks to continual upgrades and the age allowance provisions of the rule. Windward Passage was designed by Alan P Gurney for Robert Johnson of the New York Yacht Club, to replace his earlier yacht Ticonderoga, and the ocean racer was built by Grand Bahama Yacht Builders. She was 72ft 9in long, just below the 73ft maximum length then imposed for the Bermuda Race, with a relatively light displacement of 80,000lb and an easily driven dinghy-like hull form, and a balanced blade rudder without a skeg – a combination that was markedly different to any other large yachts of her time. Her original configuration was that of a ketch (where the rudder was set abaft the mizzen), with the mainmast forestay set off a short bowsprit. 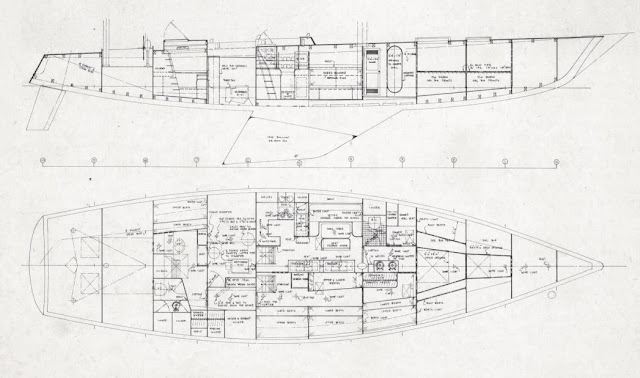 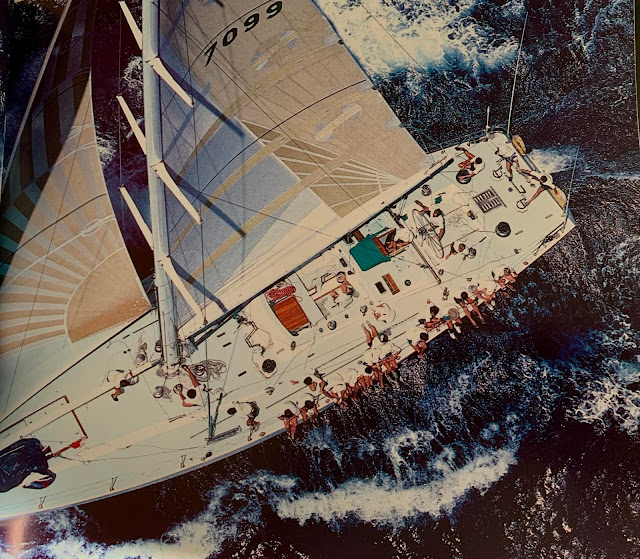 Muir then commissioned a new boat, a fractional maxi designed by German Frers, named Windward Passage 2. He campaigned both yachts in 1989, including the Sydney-Newcastle race.
Peterson designed further modifications for the boat after she was retired from racing by Muir, with a shorter rig and shoal keel, along with interior and deck modifications. It appears she had a second life as a charter yacht in the early 1990s, and she has undergone further upgrades and modernisation and is now looking as good as ever, and being sailed from Newport Beach, California. 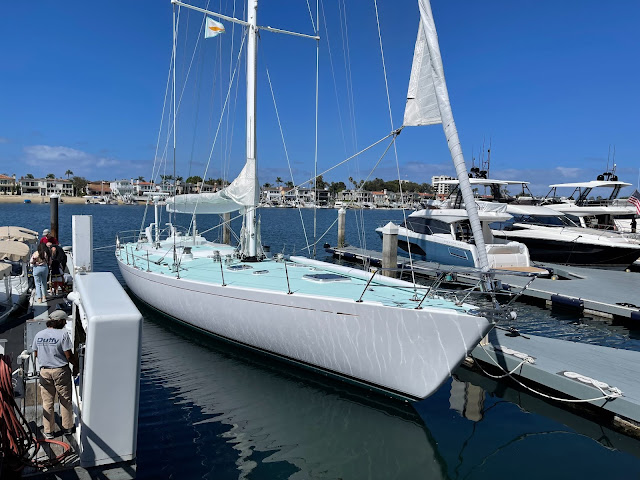 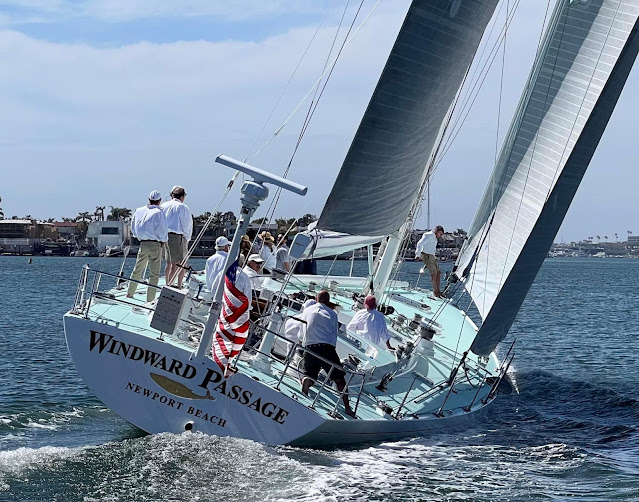