With the overall regatta decided on the penultimate day, the Euro Car Parks Half Ton Classics Cup was presented to Phil Plumtree and the crew of Swuzzlebubble at Kinsale Yacht Club, Ireland on Friday night.

A single ‘round the cans’ final race earlier in the day also delivered a full eleven race programme despite losing a day to strong winds. Swuzzlebubble’s series ended on Thursday after ten races of mostly first and second places confirmed their pre-event favourite status and this year’s win is the third victory in the 40-year old boat’s modern record adding to previous wins with Peter Morton and Greg Peck. On the water, Swuzzlebubble’s impressive upwind performance is hard to miss, but with the highest IRC rating in the fleet (0.975). she typically needed to finish by more than a minute and a half over her nearest rival in the inshore races to win on handicap. 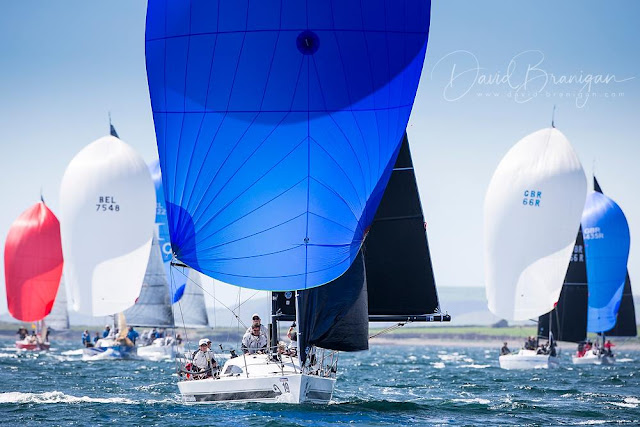 Plumtree’s ten race series saw him dominate the 21-strong fleet from the opening race on Monday in spite of an eighth place in race three. However, four races on Tuesday left little room for doubt with all first and second places for the day while the event discard took care of the high score from the opening day.

Another first and second place on Thursday saw Swuzzlebubble start the coastal course with a commanding nine-point advantage. However, the race around the scenic approaches to Kinsale and the finish off the historic Charles Fort carried a 1.5x multiplication factor and several wipe-outs in the heavy conditions at sea saw Plumtree's team place fifth.

Their nearest challengers were second placed David Cullen on Checkmate XV and Nigel Biggs on Checkmate XVIII, but both had sixth and fifth places earlier in the day that effectively decided the regatta in Swuzzlebubble’s favour as the former Kiwi classic ended with a three point advantage. A worst race discard of second allowed Plumtree to sit out the final race due to an unexpected crew personal commitment.
The regatta turned to what had been suspected all week given Swuzzlebubble’s pre-event favourite status after two previous titles: that the series is a battle for second place. This battle went down to the wire and the outcome of the eleventh race which was won by Nigel Biggs on Checkmate XVIII and he succeeded in beating David Cullen on Checkmate XV by a half point margin to take the first runner-up place.
The Half Ton True Spirit trophy, the other major award for the week was presented to Paul Wayte and the crew of Headhunter in recognition of their camaraderie within the fleet both afloat and ashore but especially for their sportsmanship. Wayte loaned a spare mast to Superhero after their own rig was badly damaged en route to Ireland that enabled the Finnish entry to start the regatta last weekend.
Tributes were paid to Principal Race Officer Anthony O’Leary and Regatta Director John Stallard of Kinsale YC with their team of volunteers who delivered a memorable series.

Class President Philippe Pilate on General Tapioca was best of the continental entries in fifth overall in the 21-strong turnout. At the prize-giving ceremony, he confirmed that the 2018 championship will be held at the Royale Koninklijke Yacht Club (KYCN), Nieuwpoort in Belgium from the 20th to 24th August, where a team of volunteers are already planning a week of great racing and hospitality. 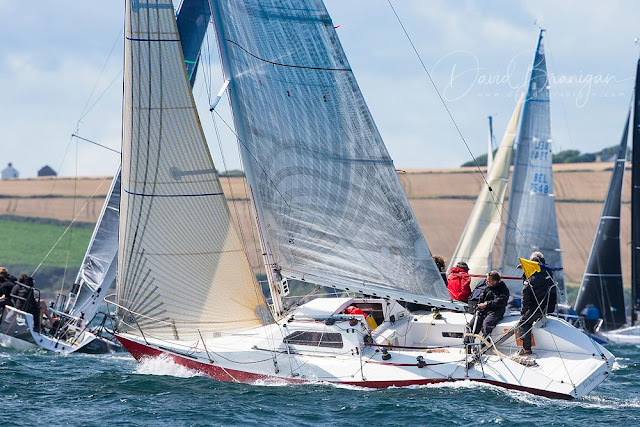 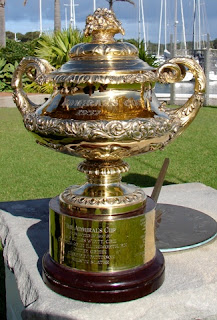 In the early hours of 12 August 1987 (UK time), and 30 years ago today, New Zealand's team of Propaganda, Goldcorp and Kiwi finished in fourth, 11th and 20th in the Fastnet Race to win the coveted Admiral's Cup for New Zealand for the first (and only) time. The New Zealand team had amassed 1,365 points to hold out the British team of Jamarella, Juno and Indulgence by some 84 points. They had gone into the Fastnet Race, the final race of the five-race series, with a lead of 109 points, and just needed to stay close to their British rivals to secure their win. They did this to near perfection, with Propaganda just one place behind Jamarella, and Kiwi pushing Indulgence into 25th. Juno had an impressive 2nd place, but this was not enough to overcome the overall Kiwi dominance.

From the RORC History page:

1987 was the year when the New Zealanders achieved what they had long threatened since their first challenge in 1971; the double - the Cup and the top-boat slot with Propaganda (below) sailed by 'Billy' Butterworth and his boys.'
Their effort was uncommonly like the German bids of 1983 and 1985 - a home grown-effort based around a small group who had all the right skills. New Zealand yachting was, and remains, an illusion. Although in the 1980s the Kiwis won virtually everything worth winning, this giant in sailing is actually a country of only three million people. And while the Kiwis are boat-crazy, having one of the highest per capita ownership rates in the world, there is scarcely any grand-prix IOR sailing at home to speak of.
On a roller-coaster of success, the Kiwis had won the World Youth Championships, five medals at the Los Angeles Olympics, had made the Whitbread Round the World Race their own, won the Kenwood Cup and made an indecently impressive debut at the America's Cup. In 1987 at Cowes, they beat the Germans and twelve other nations at their own game. They came with the best-prepared team; their boats had excellent speed and the sailors were good enough to sail a textbook series which minimised risk and maximised points. Only Propaganda seemed to have an extra cutting edge with her phenomenal upwind form. Don Booke, the team manager from the Royal New Zealand Yacht Squadron, was not exaggerating when he said: 'We believe we won the cup twenty-four months ago. We sat down and got contributions from everyone who had been involved in the Champagne Mumm Admiral's Cup and had monthly meetings at the Squadron. Our big job was to change the triallists from enemies into friends.' So the Kiwis put in a full twenty days practice in Auckland's Waitemata Harbour before coming to the UK, and then had another twelve days sailing in British waters, with video analysis to bring crew technique and sail shapes to race-readiness. They even sailed a practice overnight race in the Channel, something few teams had contemplated before. The squad were coached by Californian Rod Davis, who by then had put his roots down in New Zealand through marrying the sister of ace sail designer Tom Schnackenberg. He prepared their programme, advised on sails, suggested new gear and moved crew around. John Clinton, the sail designer for the KZ-7 12-metre, came over to England to re-cut the sails, though Rick Dodson thought the Kiwis had anticipated British conditions pretty well. Dodson, who had been Swuzzlebubble III's mainsheet trimmer when she'd been top Admiral's Cup boat in 1981, was now skippering Mal Canning's Laurie Davidson-designed One Tonner Goldcorp (ex Mad Max).

No mean sailor himself, with five America's Cups and an Olympic gold and silver medal to his name, Davis was worth listening to. 'I am the catalyst to help them figure out how to do things. You win the Admiral's Cup by putting three boats in the top ten or twelve places in every race. You do that by not breaking anything, by not doing anything stupid and by staying outside the protest room - no bogies, no double bogies, no sand traps!' Admittedly, Davis had good ingredients with which to work. Goldcorp had been re-vamped stripped out by Dodson and Davidson, to be turned into the winner of the New Zealand trials.