New Zealand and the wider sailing world lost one of its great yacht designing talents, Laurie Davidson, this week (4 October 2021). Davidson was a major force in leading edge IOR design in the 1970s and 80s, starting off with his breakthrough Quarter Tonner Fun before going on to find further international success with winning designs in Half Ton, Three-Quarter Ton and One Ton world championships in the 1970s and was a key part of New Zealand's success in international yacht design through into the 1980s and 1990s. He will of course be best remembered for his breakthrough designs for Team New Zealand in their successful 1995 America's Cup challenge and 2000 defence, but created fast and beautiful looking yachts across the whole design spectrum.

A tribute article can be found on the Yachting New Zealand website here, and some of his famous designs from the IOR era are presented in the gallery below.

This article is a tribute to the mighty Steinlager 2 (or Big Red as she became known), Sir Peter Blake's all-conquering Maxi ketch that won the 1989/90 Whitbread Round the World Yacht Race. 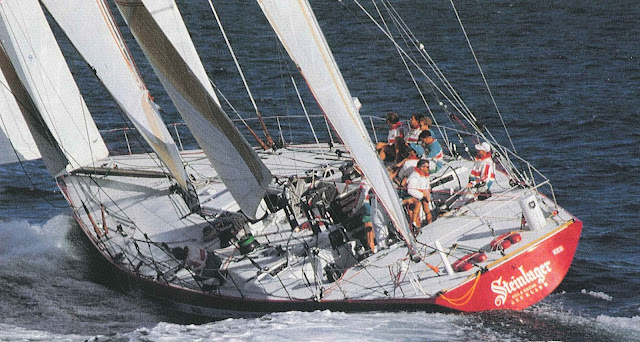 Blake had been involved in all previous Whitbread races, including as skipper of Ceramco New Zealand (1981-82) and Lion New Zealand (1985-86). Due to race course changes for the 1989/90 edition of the Whitbread, a different kind of yacht was called for due to the expected increase in downwind and reaching conditions. Farr Yacht Design was commissioned to design Steinlager 2 - and she would be initially modelled on the base design developed by the Farr office for the 1989-90 class of Maxis, which were to be an evolution of Farr's earlier yachts such as UBS Switzerland and NZI Enterprise. Development of the base design followed tank testing of hull concepts at the Wolfson Unit, the costs of which were shared between four Maxi syndicates (the process embarked upon by the Farr office is detailed here). 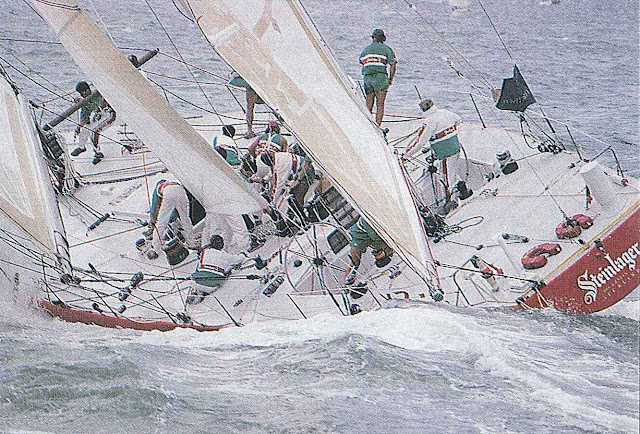 Those four designs were then developed to suit the different needs of each syndicate to create Steinlager 2 (Farr design no.190), Fisher & Paykel (another New Zealand entry, skippered by Grant Dalton, design no.191), Roger Nilson's The Card (no.195) and Pierre Felmann's Merit (no.183).
It was initially intended that they would all be sloop rigged but, as this race would include more downwind sailing than the previous races, three syndicate heads, Blake, Dalton and Nilson, asked Farr to investigate the relative speed potential of a ketch. Farr’s research, using 'Fast Yacht' software and a Velocity Prediction Programme, revealed that a ketch had potential to get around the Whitbread course more quickly. The ketch rig also yielded rating benefits on two fronts. Firstly, the IOR treated a ketch rig as old-fashioned and inefficient, with the mizzen being rated less than the mainsail, a benefit that increased with greater distance between the two masts. It also only measured the mizzen, and not the mizzen staysail. Secondly, these benefits were further enhanced when calculated under the Mk IIIA version of the IOR, a rule amendment that was developed to penalise lighter displacement yachts (and where Farr yachts were particularly targeted) in the late 1970s. The reduction in measured or rated sail area could then be transferred to hull length.The Farr office delivered a design to the Blake campaign that looked very similar to Dalton's Fisher & Paykel (F&P), a mast-head ketch. Blake went one stage further by suggesting that a fractional ketch could be even faster, based on his experience of his father's ketch yacht, and so he persuaded a reluctant Farr to run his models again based on this new concept. The VPP result was encouraging, but even more gains were made on the rating side of things. The fractional rig provided an even lower rated sail area, but the Mk IIIA equation provided additional benefits through increased length and displacement, and so in the end Steinlager 2 became longer and heavier than her sisters, for the same 70.0ft rating (the maximum allowable for the Whitbread and IOR races generally). She also sported a bulb keel - such a feature would normally be a rating disadvantage as the IOR tended to penalise stability (to a minimum point), but perhaps such a penalty was deemed worth it given the length and sail area gains made elsewhere under the rule.
So Steinlager 2 was a big Maxi, at 25.5m long (nearly 84ft) and 35,177kg displacement, half a metre longer and more than 3,200kg heavier than F&P. However, it's worth noting that she was not as big as the fastest inshore Maxi at the time, Bill Koch's 26m-long Matador 2, which was 25% heavier at 45,350kg, and Steinlager 2's offshore-orientation meant that she was also significantly lighter than Farr's inshore Maxi of the same era, Longobarda (39,450kg). In addition, and despite the cloud of sail she was able to carry when reaching and downwind, and thanks to the quirks of the Mk IIIA formula, she also had a much lower rated sail area, at 288m2, compared to Matador 2's 325m2. Blake's earlier boat, Steinlager 1, a trimaran designed and built to win the 2-handed Round Australia race, established the materials and techniques that would be used by Southern Pacific Boatyard to construct Steinlager 2, with the general construction approach for all four Farr Maxi's being "carbon/Kevlar composite with Nomex and PVC foam core used selectively for various effects in weight (relative to cost), stiffness, strength and overload failure mode". However, despite the success of that earlier project, the first version of Steinlager 2's pre-preg composite hull was found to have serious delamination due to a resin problem which meant the entire hull had to be disposed of. Fortunately the sponsors continued to back Blake's ambitions and a new hull was built with all materials verified by SP Systems. 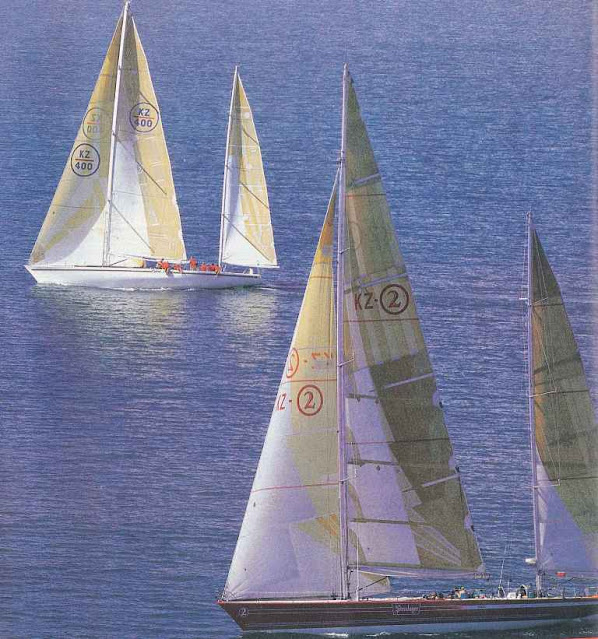 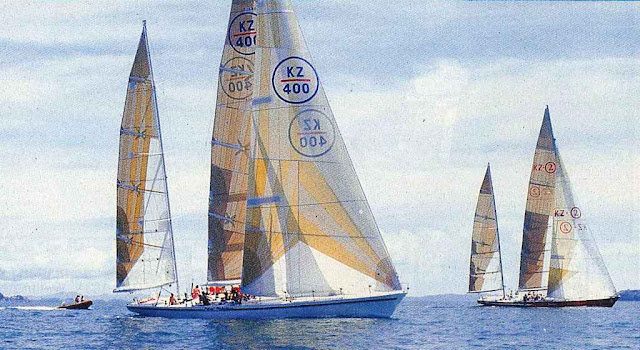 After launching, Steinlager 2 and F&P began an informal two-boat testing programme in New Zealand, with F&P edging out Steinlager 2 narrowly in the 100-mile Noel Angus Memorial Race, before they were both shipped to England.
Both New Zealand yachts contested the 1989 Fastnet Race in England, with this classic offshore race providing a useful 'warm-up' for the big race. Steinlager 2 proved to be very fast downwind and she took line honours, just over three minutes ahead of F&P, providing an important confirmation of her design concept.
As readers will know, Steinlager 2 went on to take victory in all six legs of the Whitbread against a fleet of 14 maxis, with a total elapsed time of 128 days 9 hours, well ahead of second-placed F&P's 129 days 21 hours.
After the race finished Steinlager 2 remained in the northern hemisphere for 20 years, under three different owners. She was variously known as Safilo and Barracuda before Swiss sailor Stefan Detjen bought her in 2003. He restored her original name and distinctive original livery, sailing her in six Atlantic crossings (including a Huelva to La Gomera race record), three Middle Sea Races and various Mediterranean regattas. She also took part in some Whitbread reunion races, including the Volvo Legends regatta in Alicante in 2011. 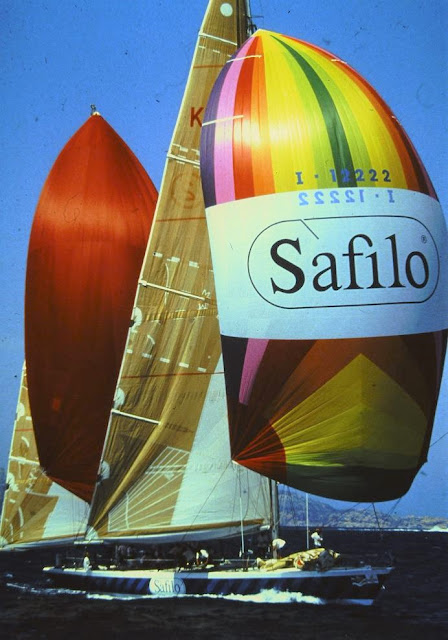 The New Zealand Sailing Trust had been established in 2008 to purchase Lion New Zealand – Blake's Ron Holland -designed yacht which he had taken to second place in elapsed time in the 1985/86 Whitbread – so as to provide sail training experiences for young New Zealanders. There was a growing feeling that Steinlager 2 should also be returned to New Zealand and the following year the opportunity to purchase her arose, so the Trust immediately did so. She was then sailed back to Auckland via the Panama Canal. After an extensive refit, Steinlager 2 was relaunched in November 2013 to take up her new role. Since then, she has participated in various races such as the Coastal Classic and Auckland to Suva, but with a focus on taking New Zealand schoolchildren on voyages all over the Hauraki Gulf.

The fractional ketch concept was subsequently adopted through three new Farr Maxi's for the 1993-94 race, and taken to the extreme. Dalton's yacht, New Zealand Endeavour, which went on to win that race, is covered in this article.