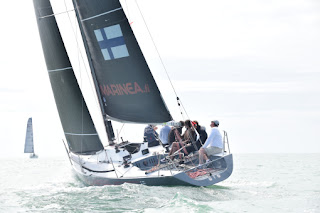 From May 9th to 12th the Italian Open Half Ton Classics Championship was held on May 9th to 12th, hosted by the Tecnomar Nautical Club in Fiumicino. This year's event was attended by two strong foreign crews, an Irish team led by David Cullen, winner of the last Half Ton Cup, who chartered local boat Gunboat Rangiriri from Claudio Massucci, and the Finnish and Belgian team of Toni Stoshek who brought his fast Superhero (photo, right) to Italy for the series.
There was a modest fleet of ten boats, most of whom were largely original but Superhero has been modified and is now a “modern” Half Tonner so was the expected winner being only one of its type at the regatta. Massucci has taken great pride and effort to keep Gunboat Rangiriri in its original configuration and so she still sports running backstays, and a centreboard.
Conditions on the first day forced the race committee to cancel the scheduled races, but three races were held on the following day in winds between 8 and 12 knots. This saw close racing between Gunboat Rangiriri, Superhero, Pili Pili (Gorgio Martini) and Stern (Massimo Morasca), with the Irish crew posting 3,1,1, against Superhero's 1,3,2 and Pili Pili's 2,2,3, while Stern couldn't break past fourth place.
The next day was the 22-mile Long Coastal Race with a points loading of 1.5 and was also the first round of the traditional Tiber Grand Prix event dedicated to all IOR boats. Light winds from the south-east allowed for timely start in which Gunboat Rangiriri and Stern took an early lead, with Superhero and Pili Pili lagging behind. Gunboat Rangiriri rounded the buoy in front of Ostia first, after a five-mile haul, followed by Stern,Superhero, Pili Pili and Prydwen (Davide Castiglia, with Gunboat's Massucci also on board).
In the following leg of 11 miles and at the next mark off Fregene Superhero and Pili Pili pulled through to match the early leaders, with Prydwen also threatening the front boats. The breeze dropped for the final 6-mile beat, into adverse current from the nearby mouth of the Tiber. Superhero managed to control their opponents and took the race win, followed by Pili Pili and Gunboat Rangiriri.
To take the Cup, Cullen and his crew needed a win in the last race, a short coastal race of 11 miles, with Superhero third. In winds starting at 2 knots and finishing in 16, it looked like Gunboat Rangiriri had pulled it off and were congratulated by Superhero. As the crews packed up their boats, Prydwen came in to take the win on corrected time to take away Gunboat Rangiri’s victory - but it was a bittersweet win for Massucci,Gunboat Rangiriri’s owner, who was sailing on Prydwen and ended up having a hand in scuppering his own boat’s victory.
So the Italian title went to Superhero in first place overall, and also collecting the Half Ton Europe trophy and the coveted challenge cup "Peppino Morasca" for line honours in the Long Coastal Race. Pili Pili received the Challenge Half Ton Class Italia Trophy for victory in the Italian Campinato.
Visit the Half Ton Class Italia website here, and a story on the event on the Irish "Afloat" website here.
Posted by RB Sailing_nzl at 5/22/2019 No comments: