Bullfrog was Doug Peterson-designed 55 footer (Design #116) that had a very successful racing career through the early 1980s. Bullfrog was built for Californian yachtsman David Fenix by Newport Offshore in aluminium using a method to glue and rivet the skins to the frames instead of welding. This allowed for much thinner aluminium skin to be used. She was finished in a deep green topsides with white bottom which, allied with a sleek bow and stern profile and flush deck, resulted in a striking looking yacht.

Bullfrog was perhaps the archetype of the heavy and powerful, masthead-rigged IOR yacht of the 1980s, but one that displayed the more balanced and easily driven lines of Peterson's later design approach than his earlier pintail types. Her IOR rating certificate shows a Centre of Gravity Factor well above the minimum (0.984) for good windward performance, and a relatively low rating of 44.4ft (under Mk IIIA). When well sailed as Bullfrog was, this type remained competitive in a transition period towards lighter fractional-rigged yachts, and she was the dominant IOR 'A' boat on the US West Coast over three years - she won the Big Boat Series twice as well as Long Beach Race Week. 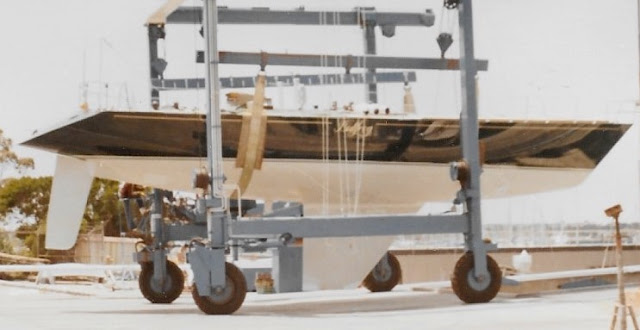 Bullfrog also formed part of the US "Blue" team in the 1982 Clipper Cup, the bi-annual international regatta held in Hawaii, where she sailed alongside Clay Bernard's Davidson 50 Great Fun, and Jim Kilroy's Holland Maxi Kialoa IV.  Bullfrog was helmed by Tom Blackaller in this series, and started the regatta strongly, with a second in the first and second races, both Olympic triangles, and like the rest of the regatta, was held in very windy conditions.

But Bullfrog experienced continual problems through the series with her mast, a small-section triple-spreader Stearn spar. It featured an internal spinnaker boom track which also served as a stiffening member, but this came adrift regularly and its fastenings, however bolstered, were never quite strong enough for the job. She was sailed conservatively in the 143-mile Molokai Race, in very fresh conditions that saw many breakages throughout the fleet, but still managed a creditable fourth place in Class B (of 15 boats - her overall position in that race is not known).
Bullfrog put in another strong performance in the fourth race, another Olympic triangle, finishing second, and went into the heavily weighted last race, the Round the State race, in first place overall, with team-mate Great Fun close behind in second. In the Round the State, Bullfrog again performed strongly in the early stages. But at the southern point of the island of Hawaii (not surprisingly known as South Point), while sailing alongside Jumpin' Jack Flash and several Class A boats in 15 knots of breeze, a toggle supporting the forestay at the masthead broke.  The repair took several hours and with it went any chance of winning the series, and dragged Bullfrog down to 11th place overall (and fourth in Class B). While Great Fun also dropped to fifth overall, Kialoa IV was well-placed in fourth after a dominant performance in the final race, and the US Blue team took out overall team honours for the series.
The 1982 Clipper Cup also featured Monty Livingston's Peterson 50 Checkmate, which finished in ninth place overall.  Bullfrog was later taken over by Livingston and his Checkmate team, and was renamed accordingly.  This has caused some confusion over the years with the earlier Checkmate, with both boats retaining the same name. The new Checkmate (or 'Checkfrog') sailed in the 1984 Clipper Cup for the US White team, alongside Tomahawk, a Frers 50 (ex-Margaret Rintoul III), and Camouflage, a Frers 44.
In this series, Checkmate was again dominant through the first four races of the series, with placings of 1/1/3/1, with Checkmate and Tomahawk more than holding their own against the fast Farr 40's Exador and Pacific Sundance (sailing for the New Zealand 'A' team, alongside the Frers 43 Shockwave).  While Camouflage was less impressive, the US White team went into the final triple-point Round the State race just behind New Zealand A. 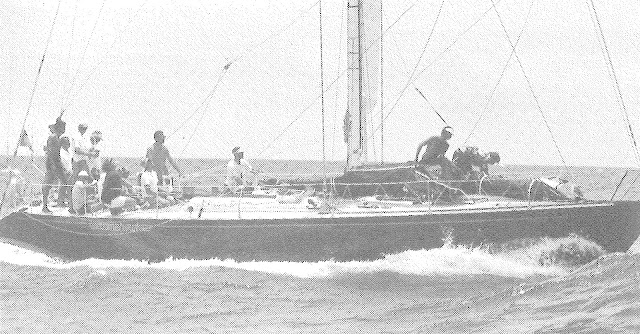 Checkmate again came unstuck in the Round the State race, being punished for a conservative rhumb line course down to South Point, and her eventual long beat to this turning point in the course knocked her out of the running for overall honours, finishing 15th, and dropping to ninth overall, while Tomahawk also finished relatively poorly in 12th and dropping to fourth overall. This demonstrated the effect of the heavy points weighting of the Round the State, as Checkmate and Tomahawk were clearly the form boats to that stage, having captured all of the Class B firsts and seconds in the first four races. However, while Camouflage was the weak link in the team, she had a stronger showing in the Round the State (fifth), and with Exador losing her mast in a freak wave off South Point, the US White team were able to carry off an overall team win.

Aside from her forays and success in the Big Boat Series, the later racing exploits of Checkmate are unknown.  However, a video exists from 2008 where she remained in her original livery and was part of a sailing school (image above).  Later, she was advertised for sale in 2014 while based in San Diego (photo and link below).

Preview of the 2018 Quarter Ton Cup

The fourteenth edition of the revival Quarter Ton Cup looks set to produce one of the closest battles seen to date in a class which is famed for its close competition. With three days of inshore racing on the Solent from 20 to 22 June, some 25 boats are expected to challenge for this year’s honours.
The fleet will be based at Cowes Yacht Haven with the race office located in the Haven’s Solent Room and the après sailing social events, which include a BBQ and the traditional Quarter Ton Cup Prize Giving Dinner, being held in the Haven Event Centre. Racing will be located on the Solent using predominantly windward/leeward courses.
The fleet got a taste of the competition to come at the recent Vice Admiral’s Cup Regatta where the Quarter Ton racing was so close that there was a three-way tie for first place between Sam Laidlaw’s Aguila, Louise Morton’s Bullet and Catrina Southworth’s Whiskers, helmed by Ian Southworth (see results below). On that occasion Aguila claimed overall victory on count back thanks to her three first places, but the gauntlet has been thrown down and we can expect Whiskers and Bullet to be seeking revenge at the Quarter Ton Cup.
This will be the first Quarter Ton Cup in 12 years not sponsored by Coutts, whose most generous support helped the class develop from a small group of friends sailing tired old boats to an enthusiastic fleet of beautifully restored historic yachts which produce some of the most competitive racing you could hope to find.
“A twelve-year partnership with any sponsor is an extraordinary achievement and we can’t thank Coutts enough for all they have done. But all good things must come to an end and we are now seeking new commercial partners. We can offer an excellent tailored benefits package and would be delighted to speak with any companies interesting in working with us” noted Class Secretary Louise Morton.
For further information about this event including the Notice of Race and Entry Form please visit www.quartertoncup.org. Members of the Press wishing to attend the event should contact Quarter Ton Cup Press Officer Fiona Brown on fiona.brown@fionabrown.com.

Here are some recent photos from the re-build of the Farr One Ton centreboarder, Smir-Noff-Agen. As readers may recall from a previous article, Smir-Noff-Agen was found in a parlous state in Australia in mid-2016, and has been shipped to Dubai where she is in the process of being upgraded to have a second life as a modern IRC race yacht.  Her wooden hull has been saved, and she is due for relaunch in September this year. She will be re-named Oro Nero, and will feature a black and gold colour scheme. 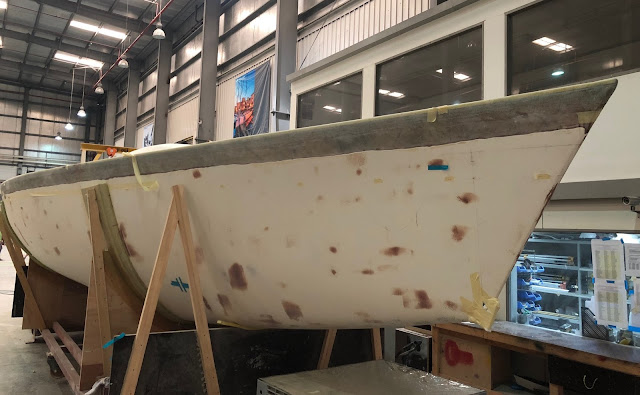 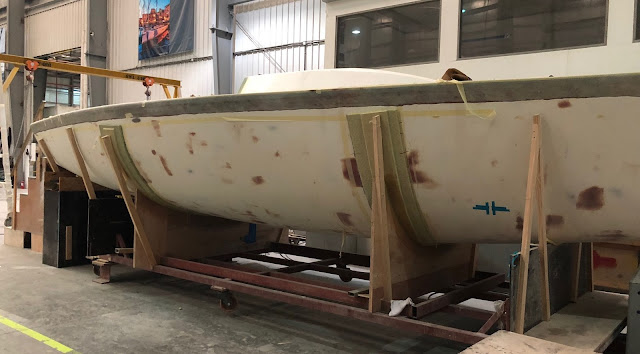 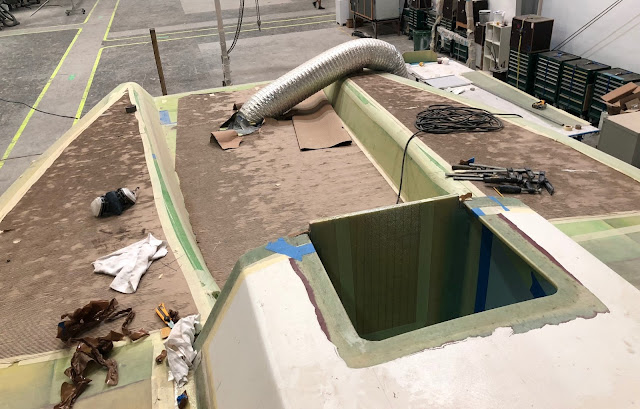 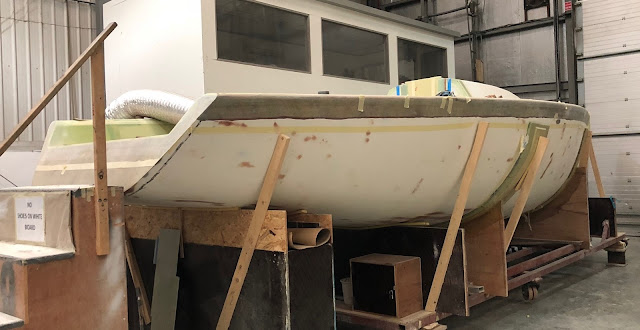