Geronimo was one of a trio of new boats to Bruce Farr's Design #136, a 12.2m (40ft) development of Farr's fast 37 footers (Migizi and Freefall, Design 124) that had shown great speed at the SORC in 1983 and were the first of a new generation of Farr IOR designs. The design was finalised in April 1983 and was the first response to the change in the ORC rules that increased the IOR limit for the One Ton class from 27.5ft to 30.5ft.

Design 136 was pitched to excel in the lumpy and windy Australian and New Zealand conditions, with less sail area and more length than boats intended for Northern Hemisphere racing, but it went on to do well everywhere. The boat was considered to be extremely stiff, with small straightforward trapezoidal keels. The design proved a phenomenal performer upwind, and in their day were fast reaching and reasonable running.
Geronimo was commissioned by Owen Chantaloup for the New Zealand Southern Cross Cup trials in late 1983, following Tom McCall's decision to press ahead with the first of the new design, Exador. These two yachts were joined by sistership Pacific Sundance (Del Hogg), and all three were built from the same mould at Cookson Boatbuilders, utilising a PVC core and some Kevlar.
The three yachts all benefited from the one-design nature of their tuning programme, and were able to edge out the only other real threat in the Hitachi-sponsored trials, from Neville Crichton's Frers 43 Shockwave. The Frers 46 Solara and the Lidgard 40 Dictator were outclassed by these newer boats. Pacific Sundance was the top performer, and Geronimo and Exador finished second equal, both carrying a disqualification in the second race.


So the New Zealand team for the Southern Cross Cup in 1983 was comprised of three  Farr One Tonners, almost a repeat of the team of 1977 (except for the inclusion in that year of Swuzzlebubble, a Half Tonner).

The 1983 team made up for disappointing efforts in 1979 and 1981 with a devastating and all-conquering performance, taking wins in three out of five races. The yachts finished first (Pacific Sundance), second (Geromino) and fourth (Exador) overall, following a sixth, eighth and ninth (in the same order) from a 160 boat fleet in the Sydney-Hobart finale. This cemented the team's win, by a massive 100 points over the second-placed New South Wales team, an even more dominant performance than 1977, and on a par with New Zealand's first win in 1971.

Geronimo returned to New Zealand after the series and I was fortunate to have the opportunity to race on Geronimo during an inter-club relay regatta in 1984. The yacht was later sold in the US, where it was re-named Total Eclipse, and painted red. It performed with distinction in the 1985 SORC, sailing with a reduced rating of 30.0ft and finished third overall. New Zealand Yachting magazine reported in April 1985 that she had tons of speed and should have won, but a lack of consistency was her undoing. She could hold the champion French yacht Diva downwind even in light to moderate conditions which was seen as encouraging at the time for New Zealand's Admiral's Cup hopes later that year.  Total Eclipse also competed in the 1986 SORC, where she finished 8th in Class 5, and 15th overall. 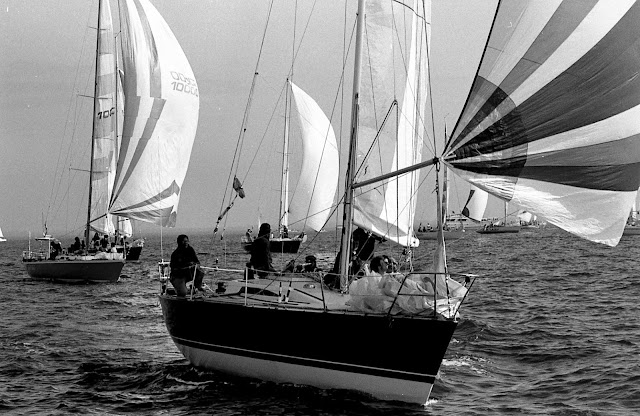 Geronimo (now Aurora Borealis) was later bought by a North American yachtsman (circa 2000) and converted for cruising.  This included shortening her keel to a wing type to cater for restricted water depths in the Great Lakes where she has been sailed since that time, as well as a new cabin top. She competed in the Mackinac Race in 1999 and 2000, and was first in her class in the 2009 MacMan. She has recently been sold and will be based on Lake Ontario.