Epic is without doubt the best way to describe the concluding day of the tenth anniversary Coutts Quarter Ton Cup. From the opening race where places eight to twenty-three were separated by less than a minute on corrected time, via the day's five dead heats, to the final race showdown where second to sixth place were separated by only six seconds, it was a drama of Wagnerian proportions. Warm sunshine and a southwesterly breeze that built from just below ten knots to over fifteen, ensured perfect conditions and Race Officer Rob Lamb took full advantage to get the final three races of the series completed in rapid order, much to the delight of the competitors.

The podium positions all went down to the final race and on the line is was so close that it wasn't until the teams were back ashore and the results had been formally calculated that the top three could be confirmed. Ultimately Peter Morton's Bullit (1979 Jacques Fauroux), crewed by Kelvin Rawlings, Jules Salter, Anthony Haines and Jason Carrington, claimed victory by 6.5 points from Rickard Melander's Alice II (1990 Phil Morrison), crewed by Fredrik Brotell, James Hynes, David Lenz and Tom Wilson, with Willie McNeil's Illegal Immigrant (1991 Ceccarelli), crewed by Willie McNeil, Nigel Young, Toby Mumford, Duncan and Mark Yeabsley, third.

A delighted Peter Morton summed up his love for the class and the event saying "It was really close, we were behind after day one, then we got one point ahead after day two and then today we had a couple of reasonable races, but you miss a shift or you miss a mark and you drop five places just like that, its very close. The boats have got character, there were 20 different designers out there today and you just don't get that in any fleet any more. When you look at the names of the designers of the boats and the provenance of those boats and the history that they've all got, you know the current King of Spain's boat is here and all sorts, they are just wonderful little classic boat. There was a lot of good people out sailing from lots of classes and a lot of people have come up and said it's just the best sailing in the Solent. I mean you look at the results and there were half a dozen dead heats, and today there were four seconds between five boats, so it probably is. You've got some world-class yachtsmen out there." (Morton has won the event in three different boats, Espada in 2007, Anchor Challenge in 2009, and with Bullit in 2012, and now in 2014).

In the Corinthian Division overall victory went by five points to Jason and Dominic Losty's Illes Pitiuses (1983 Fauroux), crewed by Mark Mansfield, Jack Trigger and Adam Mundy, who also finished in fifth place overall. In second was Pierre Paris's Pinguin Playboy (1986 Castro), crewed by Glen Hilquin, Basile Geron, Benois Duchemin and Pascal Rousselin, and Phil Cook's Purple Haze (1997 Thomas), crewed by Steve Rowan, Mark Lewis and Adrian Mountjoy, completed the podium. In celebrating their victory Jason and Dominic, who hail from Cove, Co Cork, Ireland and have attended the Coutts Quarter Ton Cup twice before, paid tribute to their tactician Mark Mansfield, who they credited with giving them the confidence and skills to make a serious challenge at this year's event.

Joining the press team on the water for the day was legendary yachting journalist and Quarter Ton Class Patron Bob Fisher, who was delighted to be out with the fleet once again. Asked how he felt watching the Quarter Tonners race Bob replied; "I had a deep feeling of jealousy! Perhaps I should devote the energies that I spend elsewhere in restoration looking for a Quarter Tonner to satisfy my urges.... They may be old and have, to some, strange shapes, even bumps, but they have a beauty all their own that no doubt attracts a certain type of sailor. He will be the one with a hankering to regain the glories of his youth and the boats, these wonderful Quarter Tonners, provide these not unusual sailors with the most delightful craft in which to pursue their aims."

Bob was also guest of honour at this evening's Coutts Quarter Ton Cup Gala Dinner and Prizegiving where he proudly wore the tie of the 1978 Quarter Ton Cup at Sahima, Japan, in which he had finished fifth overall aboard Wings. Other special guests included America's Cup legend Harold Cudmore and double Olympic Gold Medallist Shirley Robertson. The Gala Dinner is a much-loved tradition of the regatta and as always the craic was mighty.

Another tradition of the event is the fun prizes. This year's recipients included 60-year-old Willem Bosland of The Itch who won the Oldest Bowman Trophy. George and Jim Webb, Jeff Dakin, George Jubb and Tony Dodd of Flashheart who claimed the Oldest Crew Trophy with a combined age of 276 despite the fact that bowman George is only 22. The Marineware Concours D'elegance Trophy, for the best-presented boat as judged by the Race Committee, went to Geoff Gritton's Panic.
The Kemp Trophy, which is awarded annually by Coutts in memory of Stephen Kemp, who masterminded the Coutts sponsorship of the Quarter Ton Cup and who sadly lost his battle with cancer last year, was presented to Berry Aarts and his team aboard The Itch, who had gone to extraordinary lengths to be here this week after their boat and mast were damaged when the trailer became unhitched and tipped over on the Belgian motorway. Whilst others would have said all was lost, Berry, in true Quarter Ton style, simple saw the situation as a small challenge and two weeks later the boat was here and ready to race. There were also special awards made to Tim Rees, Derek Morland and Kelvin Rawlings who have raced in all ten revival Quarter Ton Cups. 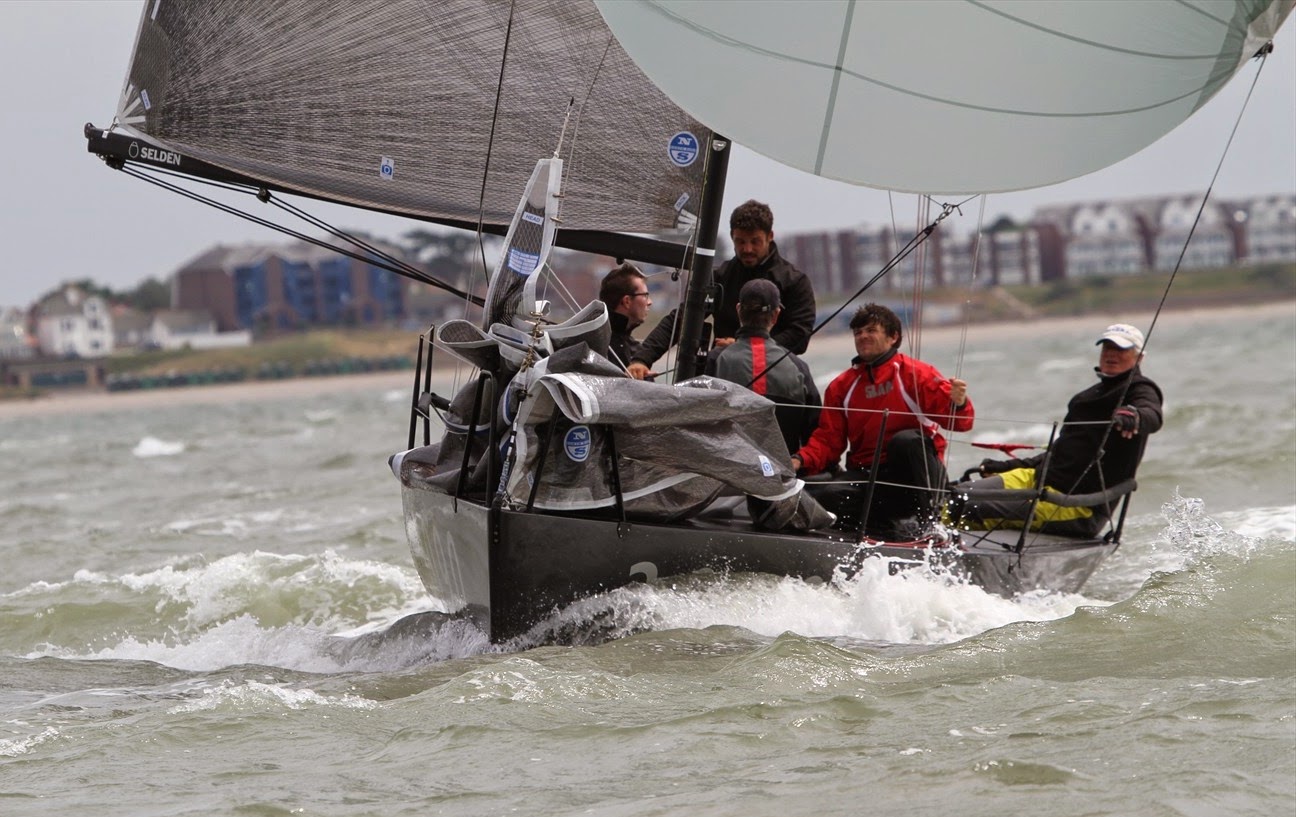 And so the sun has set on the tenth anniversary Coutts Quarter Ton Cup. Its been a wonderful regatta and special thanks must go to the Royal Corinthian Yacht Club, Race Officer Rob Lamb and his team, sponsors Coutts, all the volunteers and helpers who give up their valuable time to make the regatta possible and last but not least to the owners and sailors of the Quarter Ton Class. Who knew ten years ago that pulling a bunch of little old IOR boats out of the shed and sprucing them up to go racing would turn into this incredible phenomenon? Bring on the next ten years say all of us!