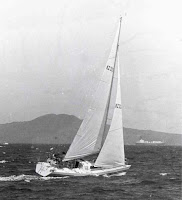 Jenny H was a centreboard One Tonner designed by Bruce Farr (Design #62, 27.5ft IOR) for Ray Haslar for the 1977 One Ton Cup, held in Auckland, New Zealand. Jenny H joined three other Farr centreboarders Smir-Noff-Agen, The Red Lion and Mr Jumpa. Another yacht to the same design was built in Australia (Hecate). All these yachts were to a similar design but various small differences were apparent on the rating sheets, with Jenny H tending towards the theme of a bigger boat and smaller sail plan, relatively speaking (rated length of 32.35ft and rated sail area of 616 sq ft).

The yachts were very experimental at the time, combining light displacement and high ballast ratios with the use of a deep and efficient centreboard and a more flexible and complex rig than Farr's earlier fixed keel One Tonners. Jenny H contested the New Zealand trials to determine the New Zealand six-boat team for the One Ton Cup, but her campaign got off to a disastrous start with a DNS in the first race. She went on to record placings of 4/2/6/4 to finish fourth overall and secure a place for the Cup series.

Jenny H also entered the Southern Cross Cup trials, to select the New Zealand three-boat team that would compete for the Southern Cross Cup to be held in Sydney at the end of the year. In a mixed boat fleet Jenny H had a close tussle with other centreboarders that dominated the results. Jenny H held off The Red Lion to make the team, joining the Half Tonner Swuzzlebubble and Smir-Noff-Agen for the trip across the Tasman.
Haslar and his crew went on to sail more consistently in the One Ton Cup and employed a different rig set up for the fourth race that extracted more speed and saw them take the gun.
However, the final race, the long offshore, was held in a near gale and Jenny H succumbed to the huge seas out near Channel Island - the yacht dropped off one of the biggest waves and cracked some for'ard frames and the decision was made to retire. The yacht made its way to Whangarei and was transported back to Auckland. This retirement dropped Jenny H down the points table, finishing fifth overall with placing of 3/4/5/1/DNF.
Jenny H made her own way across the Tasman for the Southern Cross Cup (after a controversial process to obtain the necessary Category 1 safety certificate). In Sydney and in a fleet of mixed company, with teams made up of anything from Half Tonners to Maxis, the New Zealand team was dominant.
They went into the Sydney Hobart race finale with a massive 130 point advantage over the second placed New South Wales team. Atrocious conditions in the Sydney Hobart meant, however, that this points buffer became the New Zealand teams' lifeline as Smir-Noff-Agen retired with damage for'ard after falling off a large wave, and then Swuzzlebubble also withdrew after Ian Gibbs and his crew decided that the conditions were too extreme for a small Half Tonner. Jenny H continued on, though not without their own problems with another failure in a for'ard frame. Haslar and his crew nursed the boat through the worst of the storm and managed to finish in fifth place, and finished as the top yacht overall to secure the Southern Cross Cup for New Zealand.
Jenny H was sold to US yachtsman John B Kilroy Jr (son of Jim Kilroy, of Kialoa fame), who shipped the boat to the west coast of the US in early 1978 where she was renamed Scalawag and enjoyed a great deal of success in mixed fleet and One Ton class racing, and won the 1978 North American One Ton series held in Michigan by over 20 points.
Scalawag was then taken to Flensburg, Germany, for the 1978 One Ton Cup where she finished third - overall victory was possible but unbelievably the mainsheet blocks were stolen from the boat the night before the long ocean race finale. The jury-rigged replacement broke in the 35 knot winds encountered during the race while they were leading. 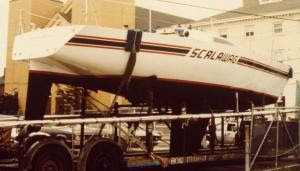 Alterations to the boat were carried out in 1979 to meet the rating challenges arising from the punitive changes to the IOR that came into force that year. These alterations were carried out under the guidance of designer David Pedrick and included the addition of a new keel, and rudder, and a re-designed bow, with a steeper profile to help to shorten her rated length. 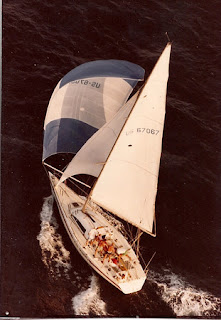 Scalawag was transported to Newport, Rhode Island for the 1979 One Ton North American series, and the One Ton Cup which would follow soon after. Scalawag was again beset with sabotage - this time someone had taken a hacksaw to the upper shroud, and after the crew set the sails, in just 6 knots of wind, the rig came tumbling down, along with Kilroy's chances of defending his North American title. Two other yachts were later found to have the same problem (including the eventual winner of the series, Firewater), but light airs meant that the race was cancelled and no other rigs were lost. That fellow competitor would go to the effort of climbing the mast to carry out such sabotage is difficult to comprehend, but as with suspected damage to the rig of Smir-Noff-Agen in the 1977 One Ton Cup, it is perhaps an indication of the prestige associated with these level rating regattas at the time. 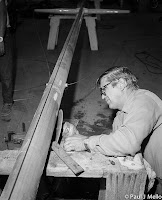 It appears that the rig was able to be repaired in time for the One Ton Cup but I have not been able to find any record of Scalawag's result (she is seen in the photograph below passing to the lee of Pendragon). Kilroy continued to race Scalawag on the west coast and then donated her to the USC. She was later bought by West Coast yachtsman Mick Shlens, and later by a New Zealander who ran a floating dock in Santa Barbara and returned the boat closer to its original configuration but included an open transom and a new paint scheme.
Tom Cahalane of The Sailing Foundation then bought the boat in 2003 and proceeded to carry out an extensive overhaul of the yacht and her rig, and renamed her Azzurra. Further upgrades were carried out in 2014. Details of her restoration and some sailing footage is available here. 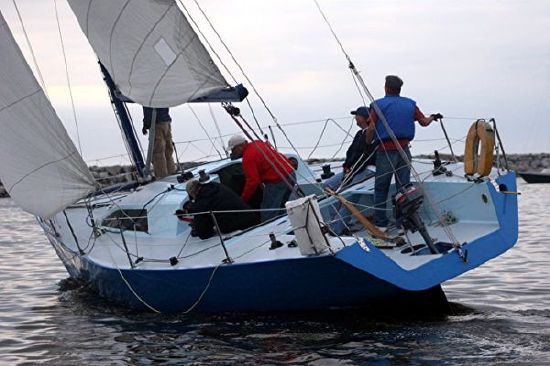 Azzurra is presently for sale, and can be viewed here.