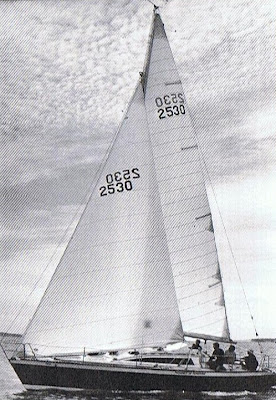 In 1975 Bruce Farr was able to turn his attention to a One Ton sized yacht (Design 51), following a commission from yachtsman Noel Angus, who had owned the 727 plug, Pinto. Angus was impressed with his Quarter Tonner and could see that a scaled up vesion would have advantages over the predominantly heavy designs of the day. Prospect of Ponsonby was built in Tauranga and launched in September 1975, just in time for the New Zealand Southern Cross Cup trials of that year.

Compared with her competition, Prospect was of light displacement (8,500lbs), and featured a fractional rig (of 13/16 proportion) - an Australian Sheerline section with a backstay, no runners and swept back spreaders. 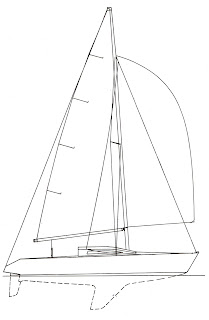 The ballast ratio on Prospect was higher than Farr's earlier designs, while the hull shape was more extreme in depth and fineness forward, with a long and wide stern that was combined with a sloping transom and overhang. The design did feature some distortions in order to achieve a lower measured length, in addition to the hard turn of the sections at the critical beam and depth measurement points. As would become common on later boats (e.g. see previous post on the 1987 Caiman), the boat featured a pronounced extension of maximum beam aft along the sheerline in order to get the crew as far outboard as possible within the overall beam measurement.

Notwithstanding her cruising compromises with a relatively comfortable interior and large cabin, Prospect turned out to be a breakthrough design, taking five guns in five starts in the New Zealand Southern Cross Cup trials and finished well clear of the second placed S&S design Quicksilver and the Brin Wilson design Tempo.
﻿

The trials were contested by 19 boats, with only one DNF recorded in the whole of the five race regatta. The fleet was dominated by heavy displacement types (other than Farr’s Gerontius and her sistership Kailua and two Spencer designs), and Prospect was untouchable in this company. Prospect was able to foot it with the other One Tonners on the wind, including Bouzaid’s Peterson design Streaker. Once on the reaches, however, she scorched away from her rivals and was reaching faster than several higher rating boats. As Farr noted, “she reaches about as fast as a good Two Tonner”, boats that were typically 6ft longer.


The absolute dominance of the series by Prospect had not been seen since the peak of Rainbow II’s career, and was all the more remarkable when considered that it had been the most competitive offshore series held in New Zealand at that stage.
﻿ 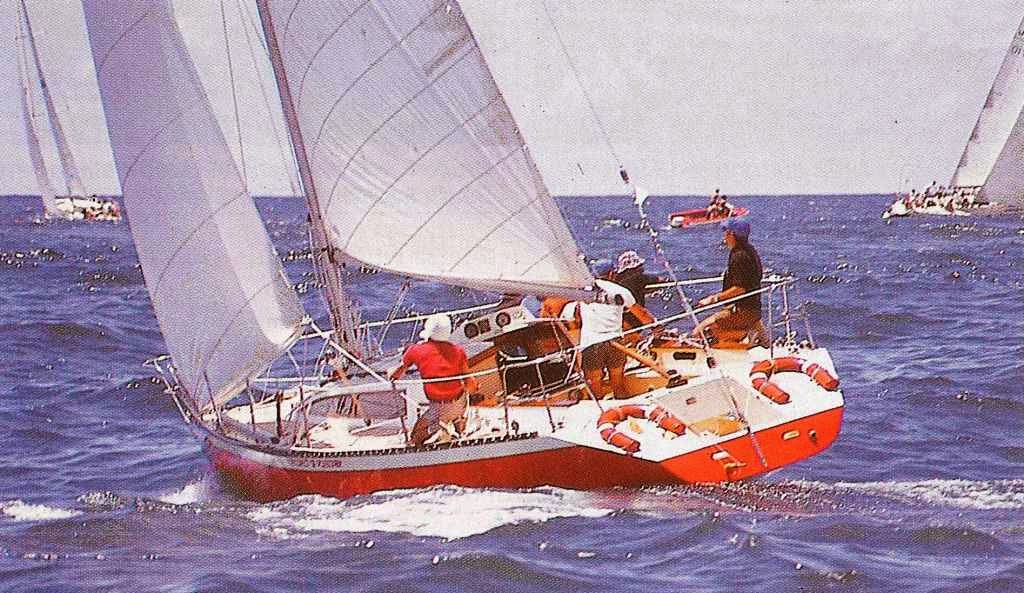 The Southern Cross Cup was contested by 11 teams and 33 yachts, which included US maxis Kialoa III and Windward Passage, and the top scoring yacht from the 1975 Admiral's Cup, the German Frers designed Noryema X. The series was hard fought, but the New Zealanders surprised everyone, including themselves, by topping the scoreboard with 545 points, 28 points clear of their closest rivals, the New South Wales team. The most intriguing aspect of the series was the showdown between Prospect and the reigning One Ton champion, Ted Turner's Peterson-designed Pied Piper, with the boats beating each other twice each - a loss of instrumentation saw Prospect sail too far offshore in the Sydney-Hobart race and finish the race in third place, but won top individual honours for the series overall.

Prospect of Ponsonby appears briefly in the CYCA film of the 1975 Sydney-Hobart race (in quiet conditions at the finish from 21:45): 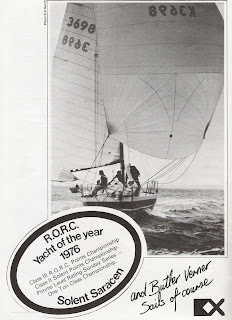 With the Dunhill Classic ocean racing series to be sailed in Auckland, and the One Ton Cup to be sailed in France in 1976, top skippers sought out the new Farr designed boats. Prospect was sold in Australia, and her continued performance led to the development of a production version of the yacht in both countries, known as the Farr 1104. From the Glass Yachts mould in New Zealand came a number of proven campaigners in the New Zealand offshore scene, including Chick Chack, Razzle Dazzle, Mardi Gras and Nell Gwyne. These boats were immediately successful, and spawned further development of the design, including The Number (later named 45 South II), Piccolo (Australia) and Sweet Okole, the latter going to win class C in the 1977 SORC, and later the 1981 Transpac. The design also found its way into Europe, with a couple of well-known English yachts performing with distinction in the English scene, including Karena and 1976 RORC Yacht of the Year, Solent Saracen, the latter owned and built by John MacCarthy, and followed his earlier champion Peterson Three-Quarter Tonner of the same name.